Handelsblatt, Germany’s leading financial daily newspaper, is temporarily moving its editorial headquarters to London during the week up to the Brexit-vote.

Please join us at our “German House” to discuss the upcoming referendum on European Union membership for Britain.

From Tuesday, 21 June, to Saturday, 25 June,  our publisher Gabor Steingart  will be working from central London together with more than 50 journalists from Germany – Every evening from 5 p.m. onwards, we will hold a reception with high-level representatives from the worlds of business, politics, banking and the media to discuss the referendum and its implications for Britain and Europe in exciting, on-the-record talks.

The talks will always be followed by drinks and music. We woul’d very  like to take this opportunity to cordially invite you to one of our evening receptions.

In the week leading up to the Brexit referendum, the London editorial offices of Handelsblatt will be located at The Beagle, 397-400 Geffrye Street, London E2 8HZ. 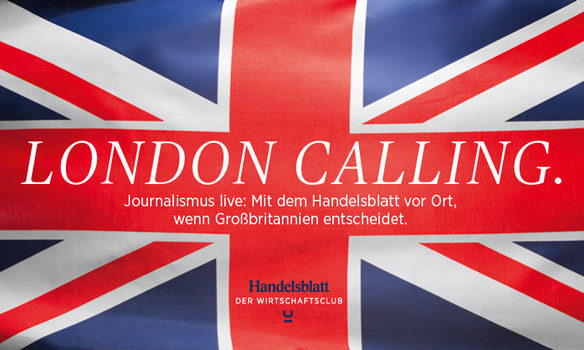 Be right on the scene as Great Britain decides its future

There is limited space for this event, so please let us know which date you are interested in attending.

Sorry, the competition is now closed.

P.S. Of course you will also have the chance to stay up to date and follow  the Euro 2016 matches on the multiple TV screens at our venue..

Sorry, the competition is now closed.